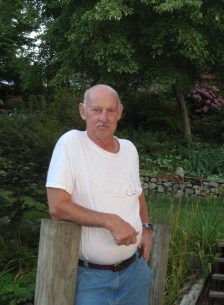 Frank was a veteran and served on Okinawa after the Korean War. Frank moved to Buffalo and was married and helped raise his kids and worked for Pratt and Lambert. Frank worked for the Army Corp of Engineers. In the 80’s he and Ann moved to Annapolis, MD where he worked at Fort Mead and also for David Taylor Research Center, a Naval Surface Warfare Center.

Frank always kept busy. He was a volunteer firefighter, both in Elma and Smith Mountain Lake. He and Ann both loved to dance and spent years square dancing around the country. Before Covid-19 restrictions he and Ann were part of the Smith Mountain Lake Bridge Club.

Frank and Ann started planning retirement early and bought property on Smith Mountain Lake Virginia. There in Moneta is where he and Ann started to build their dream home. First the boat dock to be able to go fishing. I do not think he ever caught more than a handful of fish. But he did enjoy showing us the picture of him holding the stringer of fish and looking immensely proud and letting everyone think he caught them, until Ann mentioned the truth that it was a fishing tournament that he was not part of but just holding the fish. Then came the motor home to have a place to stay. Then they built their income property and used the rent from the house to finish the basement with a kitchen and bathroom. Then they moved into the basement while they planned the next phase. Next came their dream retirement house, a log house with the boat and the jet ski. All the kids and grandkids enjoyed learning how to drive the jet ski. Frank enjoyed taking everyone for boat rides to show off all the new houses being built on the lake. We always said he has two speeds, stop and very fast. He lost countless hats and sunglasses into the lake.

Frank lost most of his vision due to Macular Degeneration, but he could still “see in his mind,” describe what I was looking at in great detail while trying to get me to fix something. He would have been able to fix it in two minutes but trying to tell one of us how to fix it had to be extremely frustrating. Frank loved all his tools, he had multiple sets of wrenches, screwdrivers, and drills. He tried to give Sean the “man eater” drill that almost threw him off the ladder more than once and he described as needing three hands to manage. He loved to build and to teach others how to do many of the mechanical and physical things he loved doing. Once, he taught his grandson Sean how to work with concrete and replaced a stair to the dock, without being able to see much detail work. He always told Sean it looked great. He and Ann spent years planning and planting the beautiful gardens at the houses. They took many years of trips to view beautiful places around the world. He enjoyed tending those gardens and lawn every day.

Frank always enjoyed his sports. As he moved throughout his life, he had to adjust favorite teams. While in Buffalo it was the Buffalo Bills. While in Annapolis it was Navy and the Baltimore Orioles. After moving to Smith Mountain Lake, one of his favorite teams was Virginia Tech. He enjoyed a well-played game and watched all sports. When he lost his vision, he enjoyed the books on tape he was given by the VA. I think once again listening to the books allowed him to “see” so many places again.

A private family service will be held.