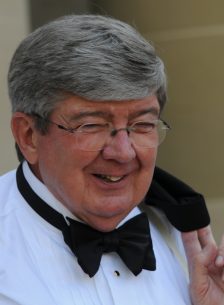 He is survived by his wife of 48 years, Karin Wellstein Doyle; his three sons, John Dillard Doyle III of Lynchburg; Steffen Robert Doyle and his wife, Louise, of London, United Kingdom, and their three children, Isabella Virginia, Robert Baird and Christopher Wells; Joseph O’Brien Doyle and his wife, Nicole, of Chevy Chase, Md., and their two children, Maximilian Gabriel and Charlotte Eleonore; and by his daughter Susannah Wells Doyle Lunke and her husband, Brandon, of Nashville, Tenn., and their three children, Johann Kristoffer, Steffen Robert and William Erich Joseph.

In addition to his family, John also leaves behind many devoted friends who were such an important part of his life. John was a graduate of Holy Cross Schools and the University of Notre Dame.

John was the President and owner of The Pettyjohn Company for many years. He was currently working as Chairman of the Board of Pettyjohn, Wood & White Corporation. John was an active member of Holy Cross Catholic Church.

John loved Lynchburg. He spent his lifetime here working to support the community that meant so much to him. Through the years he was actively involved with the Region 2000 Business and Economic Development Alliance (Chairman), Lynchburg Regional Business Alliance Board, The Boy Scouts of America, Lynchburg Museum Advisory Board (Chairman), Appalachian Trail Club, Jones Memorial Library Board, Men’s Central Virginia Horticulture Club, Kiwanis and Kiwanis International Exchange, Lynchburg Estate Council, Lynchburg Chamber of Commerce, and The Community Diversion Board among many other organizations and causes who looked to him for guidance.

John’s family would like to express their gratitude to the many caring people who helped him in his final days.

A Requiem Mass will be held at Holy Cross Catholic Church, 710 Clay St. Lynchburg Saturday, June 2, 2018 at 11:00 a.m. followed by a reception in the Church Commons where the family will greet friends. The burial will be private for the family.