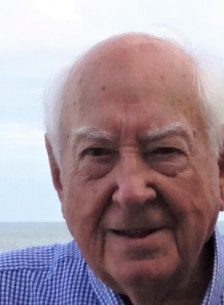 Frank Rosser. Gough Sr., 94, of Lynchburg, departed this life on Thursday, November 28, 2019, following a short illness. He was the husband of the late Joyce Miller Gough.

He was born in Campbell County, on January 12, 1925, the youngest of Frank H. and Mary B. Gough’s seven children. Preceding him in death were his wife, his parents, his brothers and sisters, and his eldest son, Frank R. Gough Jr.

Rosser was a long-time manager of the Vaughan Tire and Appliance Store on Church Street. He spent many enjoyable years there, and he and Joyce were fortunate to have been able to participate in many GE-sponsored trips to various worldwide locations. He especially enjoyed spending time with his good friend and mentor, Mr. William C. “Bill” Vaughan. Following retirement, Rosser was owner and operator of the General Electric Employees’ Store on Candler’s Mountain Road.

He was a 32nd Degree Mason and Shriner. He served various offices, including that of Worshipful Master of Mackey Lodge #69, in Rustburg, Virginia. The Lodge recently recognized him for 70 years of faithful service.

Rosser enjoyed all sports. Later in life he especially enjoyed watching both the University of Virginia and Virginia Tech football games on television. He and Joyce were avid golfers who enjoyed each other’s company both on and off the golf course. They particularly enjoyed traveling with other couples on long weekend golf trips. Although he lost his golfing partner earlier in life, he never lost his love for golf. He continued to play with the guys well into his 90’s and was fortunate to “shoot his age” on more than one occasion. Most of all he cherished his family. He loved spending time with them whether it was weekends at Smith Mountain Lake, beach trips, or family gatherings.

The family will receive friends on Sunday, December 1, 2019, from 2 until 4 p.m. at Tharp Funeral Home, 220 Breezewood Drive. Lynchburg. He was a long-time member of Fort Hill United Methodist Church. A celebration of Rosser’s life will be held at 11 a.m. on Monday, December 2, 2019, at the church with the Rev. Marc Brown officiating. Interment will follow in Fort Hill Memorial Park.

The family expresses gratitude to the physicians and to the staff at Lynchburg general Hospital, the Summit Health and Rehabilitation Center, and Centra Hospice for their care and kindness shown to Rosser during his illness.