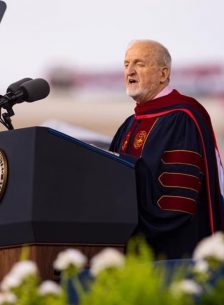 Dr. A. Pierre Guillermin, 82, of Lynchburg, Virginia, passed away on Tuesday, July 16, 2019 at Westminster Canterbury in Lynchburg. He was born on November 23, 1936 in Buffalo, NY. He is survived by his wife of 60 years, Louanne Rupp Guillermin, their daughters Michelle Guillermin and Lisa G. Gable, their son-in-law James S. Gable, and their granddaughter Helen-Anne Gable.

Dr. Guillermin was the co-founder of Liberty University in Lynchburg. He served as president of the university for 26 years. Established in 1971 with 154 students, Liberty University today enrolls over 15,000 resident students and 100,000 online students. Dr. Guillermin attended Ridley College, St. Catharines Ontario, Canada, a university preparatory school and was recognized as a “Ridleian of Distinction.” He earned a Bachelor of Arts in Communications and a Master of Arts in Religion from Bob Jones University and a Doctorate of Education from Nova Southeastern University, with additional postgraduate studies at the University of Virginia and Harvard University. He was appointed by former President George H.W. Bush as a Presidential Advisor on Education and was appointed by the Secretary of Defense and the Secretary of the Navy to serve on the Board of Visitors of the Marine Corps University and Marine Corps War College. He has lectured at Oxford University; was an advisor with the Shiloah Center for Middle Eastern and African Studies at Tel Aviv University and has spoken internationally on education around the world. Guillermin retired from Liberty University in 1996 and was named President Emeritus in 1997.

Dr. Guillermin was involved in several professional and community organizations including serving as president of the Lynchburg Rotary Club (Paul Harris Fellow), as a board member of World Help, the Lynchburg Chamber of Commerce, the National Conference of Christian and Jews, United Way, Blue Mountain Council Boy Scouts of American, New Covenant schools, the Association of Christian Schools International, One Another Ministries, the Big South Athletic Conference and president of SPHEX. He was a member of the Rivermont Presbyterian Evangelical Church and served as an Elder and Adult Sunday School teacher.